A complete break of the KeeLoq access control system.

We present the first successful DPA (Differential Power Analysis) attacks on numerous commercially available products employing KeeLoq. These so-called side-channel attacks are based on measuring and evaluating the power consumption of a KeeLoq device during its operation. Using our techniques, an attacker can reveal not only the secret key of remote controls in less than one hour, but also the manufacturer key of the corresponding receivers in less than one day. Knowing the manufacturer key allows for creating an arbitrary number of valid new keys and generating new remote controls.

We further propose a new eavesdropping attack for which monitoring of two ciphertexts, sent from a remote control employing KeeLoq code hopping (car key, garage door opener, etc.), is sufficient to recover the device key of the remote control. Hence, using the methods described by us, an attacker can clone a remote control from a distance and gain access to a target that is protected by the claimed to be „highly secure“ KeeLoq algorithm.

We consider our attacks to be of serious practical interest, as commercial KeeLoq access control systems can be overcome with modest effort.

By means of Simple Power Analysis (SPA), now we can recover the manufacturer key embedded in a KeeLoq receiver using a single power trace. The relevant paper „Breaking KeeLoq in a Flash: On Extracting Keys at Lightning Speed“ got accepted at Africacrypt 2009 and has been presented in Gammarth, Tunisia in June 2009.

„Messing Around with Garage Doors – Breaking Remote Keyless Entry Systems with Power Analysis “  Full video of the talk (an extended Version of Christof Paar’s talk on CRYPTO 2008) including life demonstrations: 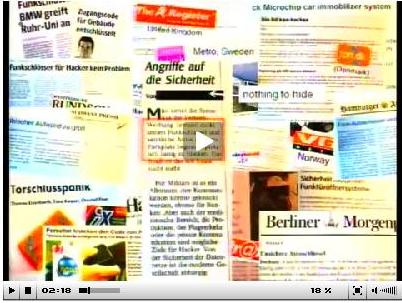 Our paper „On the Power of Power Analysis in the Real World: A Complete Break of the KeeLoq Code Hopping Scheme“ got accepted at Crypto 2008 and will be presented in Santa Barbara in August 2008.

Or play it online:

A paper describing the scientific aspects of our attacks has been published on the eprint server.
Physical Cryptanalysis of KeeLoq Code Hopping Applications

We succeed with recovering both the manufacturer key and the device key from several real-world systems emplyoing the KeeLoq cipher. We inform one manufacturer of KeeLoq products about the attacks.